Date played:  Tuesday, May 8, 2018
Number of players:  4
Max number of players possible for this room: 8
Public or private game:  Private (only because no strangers booked with us)
Outcome:  Escaped

Since we played this room immediately after Mission: Mars I’m going to just skip ahead to the relevant sections.

Setup
Once again, we were shown the intro video while inside the room. We actually picked up an item in the room during the video and were told by the Game Master not to touch anything yet, and it hurt my soul.

The story for this room on the website is as follows:

“Get ready for an exciting challenge of beating a thief at his own game. A famous piece of artwork has gone missing and it is up to your covert team to recover the invaluable masterpiece. If you succeed in your mission you will become national heroes! If you fail, you will be treated as a common criminal by the authorities. Good Luck!”

Game Play
Out of the 3 rooms at The Escape Game that I have played up to this point (Prison Break, Mission: Mars, and The Heist), this room was the weakest in my opinion. I think this was partly because the theme lent itself to decor that ended up being fairly generic. I’m kind of over any game that consists of an office in some way because it just makes for such boring, run of the mill sets. I can go in an office any normal day of my life; what I can’t immerse myself in is a prison cell. Part of the fun of an escape room is finding yourself in a world that you otherwise wouldn’t be in, so that resulted in some points lost for me.

There was one mechanical type puzzle that I liked towards the beginning of the room. I tend to like things that are manual/hands on (as opposed to just intellectual), and they had a puzzle like this that I thought was unique. On the other hand, there was a later puzzle that to me felt more like busy work than fun. I believe at two different points, at least two members of our group figured out what had to be done in a puzzle or mostly figured out the steps, and then walked away from it without doing it. That is not the “Oh, I get it!” fun type of puzzle, it’s the “Oh, we have to do that…” resignation type of puzzle. More points lost.

I listed at the beginning of this post that we escaped this room, which was great; however… we did so by accidentally skipping a bunch of the puzzles. I was checking out a puzzle that needed a specific sequence of 4 for its solution, and there were 10 options available to select from for each part. I need a mathematician to run the numbers for me on the odds of this, but I somehow randomly guessed the correct sequence just by chance. This allowed us to jump way ahead in the game. The other members of my group were working on different puzzles at the time, and we actually thought my solution came from something they had done, so we didn’t even realize what had happened until after the game was over. I of course can’t blame any of this on the company or the game design, because who would ever think that was even possible, but it did make for a confusing game for us. Still, it was kind of worth it just for the story.

Final Touches
Because of the way we escaped, there was some confusion when the game was over. The game had a clear ending that fit the story, but we still had a bunch of puzzles unsolved and things that were still locked. The GM explained to us how we accidentally jumped ahead and walked us through the steps we skipped, which was nice. There was one puzzle in particular involving a piece of the decor that I thought was really cool that I was sad we missed, although I’m not sure we would have even known to look at it/use it without prompting. We again got stickers for escaping the room. 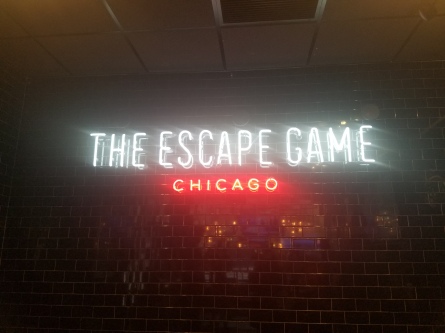 Play This Room If…
-You really like art?? (This room was so middle-of-the-road to me that even though it wasn’t bad per se, I can’t think of any strong reason to recommend it over other, better games at TEG and elsewhere.)