First Impressions
My impressions of the building and lobby were the same as when I visited back in August, which you can read about here. The staff was friendly and welcoming, and even understanding when we arrived a few minutes late.

Setup
The story for this room on the FIAB website is as follows:

“You are a professional and well-connected group of thieves. You have learned that the general manager of a local major bank is holding a sizable stash of diamonds in his office safe. In the dead of night, a break in the bank’s electrical system has deactivated all alarms for exactly one hour, providing the opportunity to make your move. If you locate and crack the safe in time, you will be rich beyond your wildest dreams. Stumble, and you will end your career of crime behind bars.”

Game Play
This entire game takes place in the dark, which I thought was a fantastic way to immerse us in the story and make it feel like we were truly robbing a bank. It wasn’t pitch black, and we were all provided with flashlights, so even for someone with poor vision like myself, there was plenty of light. It was the perfect blend of adding an element for the storyline without making it difficult to play the game or solve puzzles.

Another fun point in the game is the addition of a guard “patrol.” I don’t believe this is a spoiler to the game because the Game Master outlines it before you enter the room, so I feel okay sharing it here. We were told that when we heard the music from the theme to Pink Panther, that we should hide because it meant the guard was coming to do a security check. It added a sense of excitement and urgency during the game, and even paranoia, that heightened everything and made it even more fun. I do wonder what happens if a player remains in plain sight though. Does the GM pretend not to see them? Tell them that technically they’ve lost but can continue playing? Dock them some time?

The clue system for this room involved us hitting a button in the room, and then having cards dropped in a mail slot inside the room. This system was okay, but not my favorite. I know that having any hint system at all breaks down the feeling of immersion, but I think I would have preferred to see clues appear on a screen. Maybe there could have been a monitor that looked like one of the bank’s own screens with its logo on it, and the story was that there was someone on the outside hacking into their system to send us information.

As for the puzzles, there were a few that I really liked in this room. Fox In A Box does a good job of making sure that no outside knowledge is needed to solve the puzzles, but if you do happen to know something, it might speed you up just a tad. There was also one particular puzzle that needed to be completed by two people and I thought it was a neat idea (even though I was not good at it!)

Final Touches
We received FIAB’s signature hand-drawn card of each of us during our game, along with a FIAB sticker. We also had a picture taken by our GM. 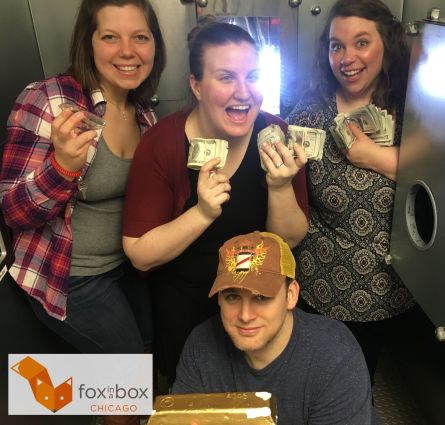 One thought on “The Bank @ Fox In A Box Chicago”